You are here: Home / Nightclubs / 4 Tricks To Get Discounts On Las Vegas Bottle Service

4 Tricks To Get Discounts On Las Vegas Bottle Service

I’m sure you’ll agree with me when I say that bottle service prices can be REALLY high, astronomical even. But does it have to be this way? Well, it turns out, there are a few tricks that’ll score you bargain prices on Las Vegas bottle service. And, yes, they apply to all Las Vegas clubs, including the most popular ones.

So, for today’s post, I’m going to show you precisely what these tricks are and how to go about implementing them. Take proficient notes because this article could end up saving you hundreds if not thousands of dollars!

But, before I get started, if you’d like a table service quote, please click on the button below, and we’ll get back to you promptly with rates and availability.

Very few people know about this first trick, as it’s one of the best ways to save some money on Las Vegas bottle service. And it’s ideal for those of you who like to be fashionably late and show up after the party has already started.

Some Las Vegas nightclubs and dayclubs offer something called “second seating.” Second seating is when clubs discount bottle service tables after the club has been open a few hours

All you have to do to get a discounted Las Vegas bottle service price is wait a few hours. And you might land a table at one of the best locations in the entire club. You’ll also most likely get to see the headlining DJ as they don’t take to the stage until around 1:30 am.

A word of caution, though. Getting a table isn’t guaranteed. And second seating isn’t available on all nights. Clubs can sell out, or bottle service guests can stay a long time at the club resulting in delayed table openings. And on the high-demand nights, prices can sometimes increase as the night goes on.

Unfortunately, you can’t book a second seating table in advance either. Instead, you’ll need to go to your club of choice around 1:30 am. There, you can ask a host at the front if anything is available for second seating. If there is table availability, the amount of the discount (if any) is determined by the club.

Purchasing bottle service on New Year’s Eve at a Las Vegas club is pricey. It’s almost double the rates on any other night. But, something interesting happens on NYE. A lot of people leave the clubs just after midnight, and dance floor tables sometimes open up. So, if you want a second seating dance floor table, this is one of the best chances all year.

In some cases, for big groups, purchasing two smaller tables next to each other instead of a larger one can save some money. For instance, two small main room tables might cost $2,500 each, whereas a big table that would hold your entire party might be $10,000.

Splitting the group up may save thousands ($5,000 in this case). Of course, some clubs won’t guarantee that tables will be next to each other, so keep that in mind when considering this option.

But even if they’re not next to each other, you might find that you have a lot more space at these tables too. Getting smaller tables may provide enough room for everyone to sit. Often, the big tables are listed as holding up to 20 guests, but it’s almost impossible to fit that many. So realistically, a lot of people will be standing.

To save even more money, opt for two smaller tables at clubs that offer second rooms (i.e., hip-hop rooms or lounges). Bottle service prices in these areas are almost half as compared to a club’s main room rates.

And, on some nights, once it gets to be around 1:30 or 2:00 am, the club will move you from the second room to the main room. So you might get to see the headlining DJ too!

Another option you may want to consider is just getting one smaller table. This works well if not everyone in your group wants bottle service or needs a place to sit down. So, for example, if the maximum number for a table is 10, but you have 15, you could still get the table for ten and have the rest of your group buy a ticket or get on the guestlist for entry.

You have to be careful here, though, because if the club thinks you have too many people at one table and it’s crowding other guests, the venue could ask you to increase the table’s minimum spend. So that’s why we only suggest this strategy if not everyone in your party wants to get table service.

Trick #3: Make A Deposit Or Prepay For Your Bottle Service Reservation

I can’t tell you how many times clubs change their table service prices. If demand increases for a specific date or if it’s a holiday weekend, lookout. Prices are sure to increase. Further still, if you put in a name-only reservation to hold a table, a club may sell it to someone else if you show up too late.

For example, at Lavo Party Brunch, we witnessed a situation where a bottle service patron didn’t get the table he wanted because he showed up too late. Unfortunately, the club had sold all the tables in the section to another group by the time he arrived.

He had made a name-only reservation and thought there wouldn’t be any issues. But, since Lavo Party Brunch is the only day club during the winter months, the demand is high and sells fast. The guest could’ve prevented this disaster by prepaying or showing up on time.

In most cases, the sooner you pay your deposit (or pay in total), the lower the bottle service cost. Conversely, the closer it gets to the date, the higher the table service prices can climb. Keep in mind, though, that some clubs don’t take any form of prepayment. In these cases, it’s best to get to the club at the opening.

Trick #4 To Get Discounts On Las Vegas Bottle Service: Keep It In The “Family”

Almost every club in Vegas is owned by a parent company that manages multiple clubs. Take, for example, the Hakkasan Group. They own Hakkasan, Omnia, Wet Republic, Jewel, and Bare Pool.

If you’re okay with booking bottle service with one “family,” sometimes you can get a deal. Please note that family deals aren’t available all the time as the best chance is during the winter. There usually aren’t any discounts during the spring, summer, and fall months.

Here are some of Vegas’s multi-club companies. 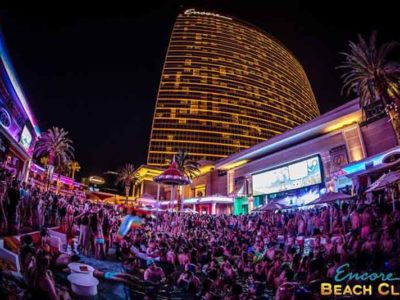