You are here: Home / Nightclubs / Latin Clubs In Las Vegas: Where Should You Go?

Latin Clubs In Las Vegas: Where Should You Go?

If you’ve been to Vegas clubs before, you know there hasn’t been much variety in music genres. Until recently, you only had the choice of two options: hip-hop (with some Top 40) or EDM.

It goes without saying that this shortage of choices has left many guests wanting more. Thankfully, though, this is all starting to change with at least one Latin club in Las Vegas now.

Deseo Latin Sundays are officially back! You can catch all the action on Sunday, October 3rd and 17th.

Currently, Omnia at Caesars Palace is the only nightclub offering Spanish music. (KAOS used to have phenomenal talent weekly, but unfortunately, that venue has closed.)

Hopefully, more clubs will follow suit and add some Latin nights to their line-ups.

Since last year, Omnia’s Latin nights have been gaining in popularity. So much, in fact, that the club has dedicated an entire day of the week to Latin music.

The specific Sundays that Omnia has Latin nights are determined a few weeks in advance. You can check Omnia Nightclub’s calendar to see when the next Deseo event is scheduled.

It’s worth noting, though, that there may be a month or two out of the year when there won’t be an event. This usually occurs during the wintertime as there are fewer people in town.

So if you want to catch Deseo Latin Sunday, it’s a good idea to head to Vegas from spring to fall.

Quite frankly, it’s one of the best views in town. The sightlines are so incredible that it’s why Omnia is a top Las Vegas Club on New Year’s Eve.

Although the terrace is smaller than Omnia’s main room, the energy out there is intense. If you ask us, a more intimate club environment is always a good thing. It’s guaranteed to feel like a party even on the slower nights in Vegas.

Now, if it’s cold outside, the Deseo event will move inside to the hip-hop room, Heart of Omnia. And if there’s a big event in town or if it’s a holiday weekend, like Mexican Independence Day, you’ll be in Omnia’s main room.

Now the best part about Latin nights at Omnia is the discounted bottle prices.

For example, if you were to get table service on any other night, bottle prices would start around $600. But if you go to Omnia on Deseo Latin Sunday, you can buy select bottles starting at about $300 to $400.

You can also score lower minimums on table service. This means that you can get a better table location for the money.

But if Deseo is on the terrace or inside Heart, then pricing might be even lower, like a one-bottle minimum spend.

Now, if you compare those rates with a Friday or Saturday at Omnia, you’ll likely find table prices to be much higher. Typically, main room prices on these nights start around $4000 and go up to 10,000+, depending on the DJ.

If you’d prefer not to get Omnia bottle service, you can often get free entry by signing up on the club’s guest list.

Generally speaking, ladies get free admission until around 12:30 am.

If you’re a group of guys, you can also get on the guest list. But you’ll typically need to have at least an even ratio of women to men in your party.

It’s also important to know that Omnia’s guest list rules vary based on demand. For example, if many people are coming, the club can cut off the list at any time and charge a cover instead.

So even if your name is on the list, free entry isn’t guaranteed.

If your group isn’t eligible for the guest list, it’s best to buy tickets online.

We always recommend getting them at least a few days in advance. Typically, Omnia removes their pre-sale tickets from their website on the day of the event.

If you wait until the event night to get your ticket, prices at the door are often considerably higher. And then there’s always the chance that the club sells out before you’re able to buy yours.

Since there’s only one major club in Las Vegas playing Latin music, it’s pretty easy to figure out where to go. But, even if more venues were offering this genre, Omnia would still be one of our top recommendations.

The club is simply phenomenal, and the views from the terrace are gorgeous. Not to mention the reduced bottle pricing makes it one of the best values for table service on the Las Vegas Strip.

So if you like Latin music or just want to mix things up a bit, we think you’ll love Deseo Latin Sundays! 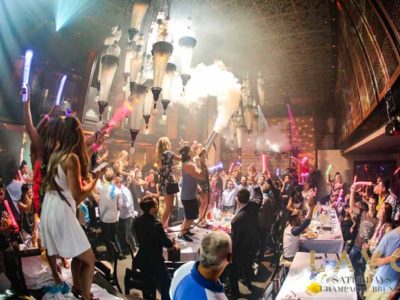